My second long weekend trip was to Copenhagen, Denmark. Where Madrid was sunny, blue skies and 30 degrees each day, Copenhagen was the other end of the spectrum…..yes there were some blue skies but it was also only about 6 degrees each day. Definitely a good opportunity to prepare me for London winter and to give me an idea of what to do/wear to keep warm whilst traveling in December.

Again, like the long weekend in Spain, my goal was to keep this trip as budget friendly as possible. Denmark is not an easy place to do that though. I booked my flights through Norwegian Air again, as they’re one of the best low cost airlines. That’s actually how I chose to go to Copenhagen, just like with Madrid, I simply scrolled through all the destinations and looked at the prices for the dates I wanted and I figured I hadn’t been to Denmark yet. Prices for the flights and the cost for the Hostel were similar to Madrid, but when It came to food that’s where things got pricey.

I landed in Copenhagen in the middle of the day and got the train to Norreport which left me with only a short walk to the Hostel. I discovered the Hostel was in a great location, fairly central to everything I wanted to see on my stay. I was lucky to check in before 2pm, which was fortunate as I had another of Sandeman’s free walking tours booked for 2.15pm. A walking tour that was due to finish about 5.30pm yet it gets dark at 4pm. The early sunsets don’t stop the northern Europeans from getting out and about in the late afternoon. The streets were still busy. The tour guide was a local and he gave us a great overview of the city’s history-the many great fires, which meant very few old buildings were still around-the royal family, the language and the happiness concept of Hygge. We stopped at a coffee shop half way through so we could warm up our fingers with hot drinks. Hot chocolate for me! I got chatting with 2 girls, one from Australia and one from New Zealand both having done the Aussies/kiwis in London thing. We got lost briefly, due to chatting so much, before meeting up with the tour group again. Right around sunset we got to Nyhaven, the canal with the coloured buildings along it that everyone thinks of when they think of Copenhagen. Timing was perfect as the sun was low and really brought out the colour of the buildings and the lights from the Christmas market along the canal were coming on. From there it got dark and rather cold quickly. I was bundled up in coat, scarf, gloves and beanie yet still felt the cold. I needed warmer socks! my new winter boot were starting to hurt my feet too. At the end of the tour the girls invited me to join them at a market for dinner but when I got back to the hostel to put on more socks, the fatigue of traveling and the cold hit me so I decided to call it an early one. That first evening taught me that I need to wear warmer socks. On the list to buy before my next winter trip! 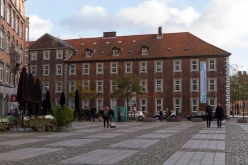 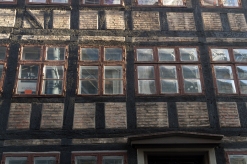 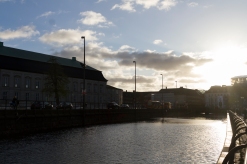 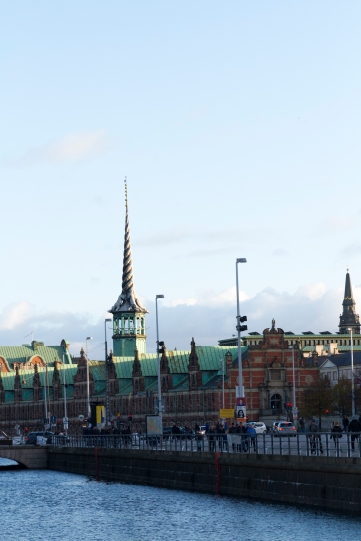 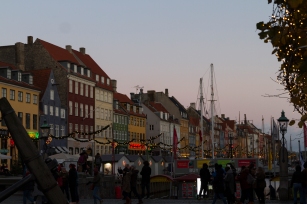 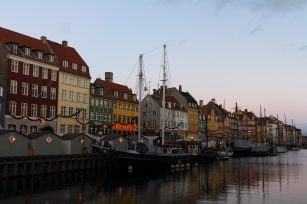 For the eqv. of 4 euros the hostel did a simple, communal dinner every night. It was veggie soup on the first night, so I sat in the bar and had a couple of bowls to warm me up, I’d also barely eaten what with all the traveling and being on the go all day, a banana muffin from a bakery not being enough for lunch, before heading to bed.

Before bed I quickly marked out on a map of Copenhagen all the places I wanted to check out and divided them up between the 2 days I had to explore the city.

Didn’t sleep that well due to many crazy irishman staying in the Hostel. It was Ireland vs Denmark in football that night and win or lose, the Irish went crazy. right up until 6am they were still partying. I went down at 7.30am for the buffet breakfast in the hostel and the place was dead, but a total mess, the poor hostel workers still cleaning up. I made sure to get my monies worth and fill up with the breakfast so that I wouldn’t need to eat lunch until a bit later. It was a Sunday and the streets were nice and quiet, the sun was only just rising. It was so peaceful. My first point of interest was to make my way to the Little Mermaid Statue. A famous life size statue along the water’s edge that frequently gets vandalised. This time the Irish got to the statue before me as I found it wearing an Irish flag! Along the way to the statue I stopped by Nyhavn again and it was just as beautiful at sunrise as it was at sunset, the coloured buildings all lit up by the low hanging sun.

I wandered in to churches, past palaces, along the main shopping strip, Stroget, as the shops opened and the streets started to get busy. I walked over to Paper Island, to eat lunch at the street food market and finally tried Smorrebrod. A new favourite. It’s a danish delicacy, eaten every day. Opened faced sandwich consisting of dark rye bread and topped with butter or cream cheese and anything else that takes your fancy. I had smoked salmon with the cream cheese and it was perfection! Having refuelled, with the smorrebrod and a danish apple crumble for dessert, I continued my exploring, this time of the island Christianhavn and free town Christiania. If you ever visit Copenhagen definitely take a look around free town. It’s a very different place to our own. They are considered seperate to Copenhagen and have their own rules that they live by. Weed can be bought, but to be honest everyone selling looked a bit dodgy. If you’re into art and the hippy life, definitely go for a wander. Dinner tonight was a paleo chicken and veggie pot from 7/11….clearly the backpackers food shop of choice due to the cheap prices, and healthy variety, and the many different accents I heard in there whilst getting food. 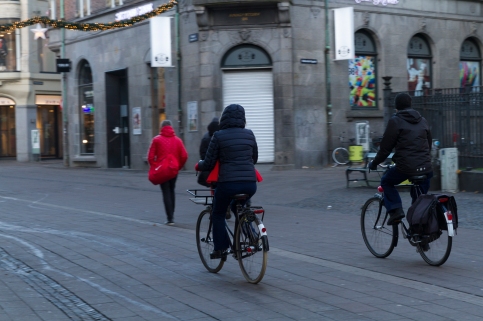 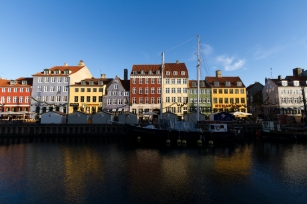 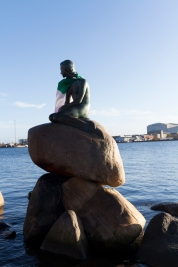 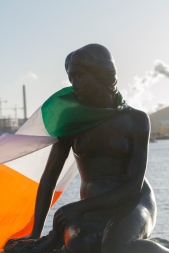 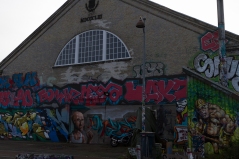 After a slightly better and longer sleep, I got up and wandered over to the neighbourhood of Norrebro to the Assistens Cemetery to see Hans Christen Andersons Grave and for an early morning wander as the cemetery is situated in a beautiful green space. Especially with the low, autumn morning sun coming through the trees. I wandered back towards central Copenhagen, via the Torvehallerne Food Market to get brekky. Firstly I ate a delicious porridge bowl from a stand called Grod….the serve all sorts of porridge options. Such a great concept! next I had more Smorrebrod from another stall because I’ve decided it’s a new favourite of mine.

I spent the afternoon wandering through the park and admiring Rosenborg Slot in the late afternoon sunlight before paying to go up the Rundetaarn (the round tower) which sits over the most central part of Copenhagen (Km0) and also offers 360 degree city views. It was cold up top but I spent time watching the sun lower over the city and just enjoying the view. This was the only thing I did that I paid for. 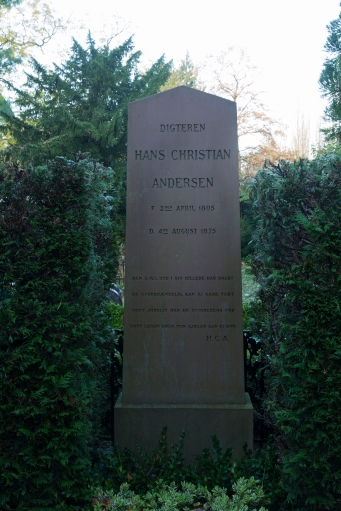 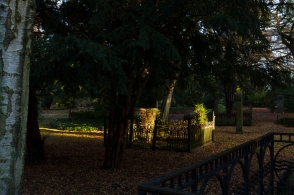 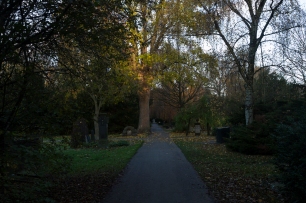 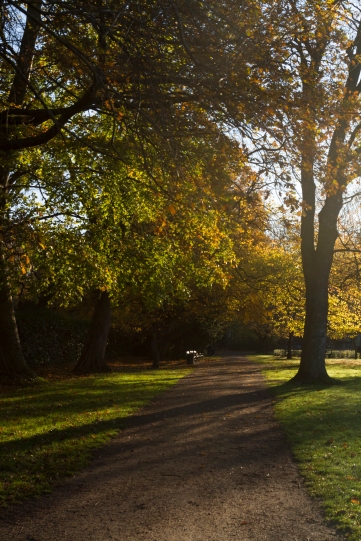 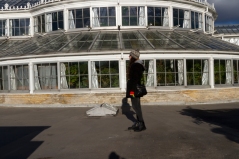 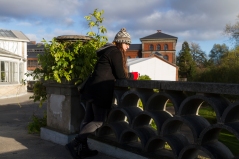 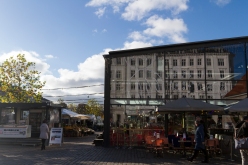 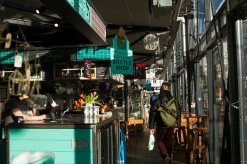 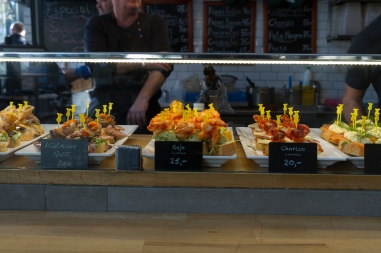 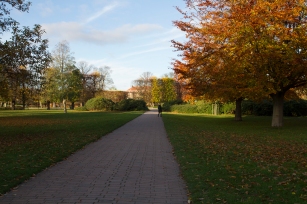 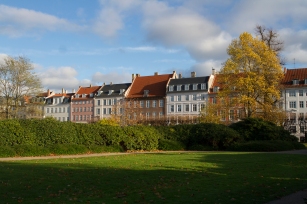 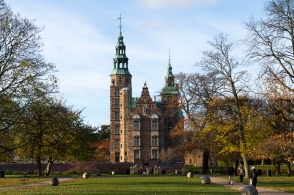 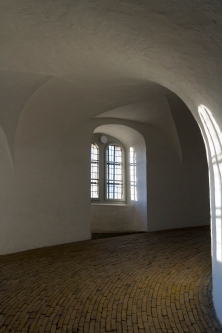 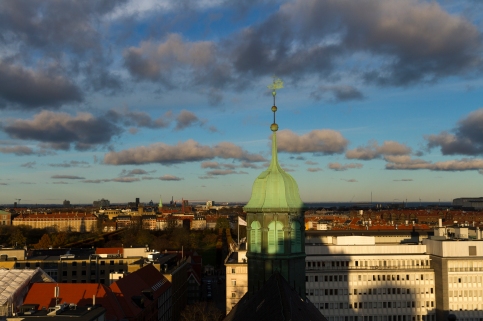 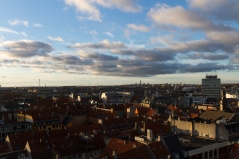 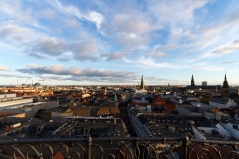 I ate the cheap communal dinner at the Hostel which was rice and chilli con carne. Perfect after a day in the cold. I sat with a girl from my dorm as we ate and as the night went by we were joined by others. An Argentinian guy, a uni grad from Cambridge and a cop from Glasgow (funniest guy ever and fortunately I could understand his Scottish accent). I stayed up a lot later then intended, drinking, laughing, chatting. It was so nice and relaxing. I did eventually get to bed as I had to be up to get my flight back to London the next morning.

I saw lots, ate lots (typical) and overall enjoyed my long weekend in Copenhagen. The locals are friendly and speak English so perfectly I didn’t have to worry about the language, which was lucky as the danish/nordic language is not easy to pick up. At the airport I bought a book about hygge as the happiness/cosiness concept has me intrigued and I want to learn more.